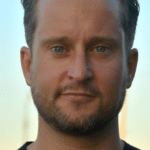 Doing By Learning, Or How I Plan To Improve My Marketing Skills

The only thing worse than a client grimacing is a client trying not to grimace. I was in my swank office space for an informal creative concept review and had just used the classic Ogilvy metaphor “When you throw 5 tennis balls at someone, none of them will be caught.” Not as an ironic, throwaway reference. I put it out there like a Big Truth, a decisive argument, instead of the stale, 40-year-old truism it was. The advertising equivalent of “follow your heart”. The account manager winced. The room was filled with hot air. I was an advertising creative at a big agency, a copywriter for TBWA Amsterdam. That was 5 years ago. I was insufferable. And I wasn’t even the worst.

Advertising agencies are created around the creative department. At least, that is what the creatives residing there believe. A finely tuned mechanism, aimed at streamlining information down the chain to the creatives’ den, that wonderful cross-over between an office and a daycare center, ‘where the magic happens’. It’s the creatives’ brilliance that the clients show up for, I was led to believe, and all other people are just there to hold their hands. “Don’t you break your pretty little head over it,” I was told by a Client Service Director when I asked her about complex client’s needs. It was patronizing and comforting at the same time, in a refreshing gender role reversal – I’ll give her that.

Now, I’ve taken a break from the agency scene. I find myself doing creative strategy and marketing communications for a start-up company in digital currencies. It’s exciting to be out in the wild, but scary at the same time. Even though I’m not necessarily in the loop about everything that happens in the company, neither am I blissfully unaware of its many moving parts and the perils that come with them. There are just so many things that can go wrong. And there is no bean bag in sight to cushion the blow when it comes. It’s a harsh life without that Praetorian guard of account people and traffic managers.

The most shocking realisation was that I have real blind spots. I have surprisingly few thorough answers to so many questions that didn’t make their way to me before. Those things that when going into depth were normally someone else’s problem, I now need to answer for. What are the best media metrics and what are the benchmarks? How can we use growth hacking? Where do I go for information? Just what is the proof that you can’t throw five messages at someone? I want to retroactively thank all the planners and account people for taking care of these questions before.

A few years ago, I realised my own limitations and started studying. Inspired by “Mindset” by dr. Carol Dweck, my plan was to no longer rely on bluster but rather on my ability to learn. Instead of flaunting my magical creative status and arrogantly assuming an expert role, I now apply myself to learning how things really work in marketing communications. I have identified my blind spots and started filling them in. Now, I want to use this blog to share my newfound knowledge, together with some glimpses behind the scenes in the cryptocurrency world, or whatever client I work for. I know that won’t make me look like an expert. I plan to do by learning, rather than learn by doing. But I hope clients will trust a ‘let me find out’ attitude more than a ‘just trust me on this’ ruse. At least they won’t have to deal with truisms anymore, I hope. Welcome to my journey.

Can't Get Enough Digital Marketing? Subscribe to our Blog!

We’ll send you the latest practical tips and tools in digital marketing so you can always stay ahead of the curve!

Get FREE access to 21 lead generation ideas that will significantly increase your leads while saving you ad spend at the same time!

Get Your Free Copy Now!